So Nick came over this morning and helped me get the motor off the ground and onto the engine stand so I could begin tearing it apart. After breaking a bolt off in the head trying to get one of the mounts setup for the cherry picker we managed to get the motor up and off the ground, though it took a couple of tries because we tried to get by with "the wrong" parts, meaning bolts in the chain that were too small for what we were doing.

Lesson learned, again, use the right damn tools, instead of trying to make the wrong tools work. You'll save time rather than trying to take short cuts.

Once we had the motor up on the stand he headed home to work on this car and I started trying to get the motor cleaned up a bit. Here are two before shots, of the front of the motor just caked in dirt and crap. 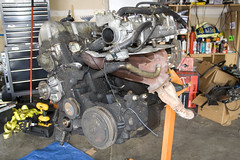 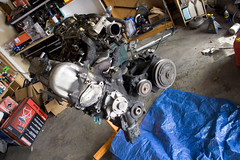 After spraying it down with degreaser and scrubbing with a wire brush I decided to finish what I started yesterday and remove the manfolds from the side of the motor. That actually went fairly easily, I'm not sure why, perhaps loading up the bolts with WD-40 yesterday before I finished helped, some of them almost seemed loose before I even cranked on them, perhaps Eric or I started to remove them last year when working on the other motor?

After getting the manifolds off I took off the last remaining attached item to the side of the motor, but honestly, I'm not sure what it was? At first I assumed it was a power steering pump, but the more I think about it the more I think it might have been the AC compressor?

After that I tried to spend some time organizing the garage a bit. I managed to get a few things hung up on the wall and made more room in there for the Corvette. I've still yet to make enough room to bring the 240Z home from storage. I don't think I'll be able to park both cars in the garage until I have the motor in the 240, otherwise I'll never have room in there for both cars and the motor, plus transmissions.

Speaking of transmissions, I need to sell the 2 extra ones I have, if anyone is looking for an automatic transmission out of a 73 240Z, or a 5 speed out of a 280Z let me know. I was told the 5 speed needs rebuilding, I have no clue about it other than that.

My goal/plan right now is to tear down the L28E and check things over, replace the rear main seal, make sure to clean it out, then try and put it all back together. I don't imagine I'll get that done before May, but I would like to spend time on it over the next few weeks if I can.