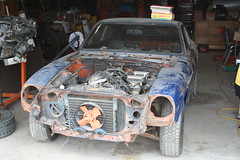 We’ve been together for almost 4 years, you and I. I was love at first site, but it took a internet chat conversation with 4 guys to get you where I wanted you. Once your previous owner let a price slip I jumped on the opportunity to buy you, and a week later you, and a billion parts, were loaded up into a trailer for the trip home.

I got you home and you fit right in next to your younger sister, it wasn’t long before she left our family to join Dozzle in Kansas City (she’s been recently reincarnated though). 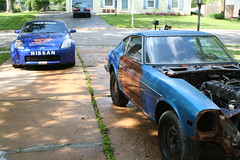 The next 6 months you didn’t get much attention, but you did gain an unsightly brother, a 1978 2+2 that you would learn to love later in life, as he provided a replacement heart for you, along with eye sockets and chest plate to cover the heart. 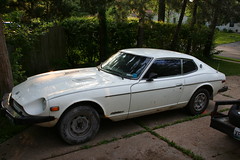 In June, about a month after you did start off strong in June by losing your inner self. That was the start of something beautiful, you became an internet star, getting thousands upon thousands of views of your videos. You even show up very high in the search results for 240z

It was the spring of 2007 before any real progress was made on you, with the very generous help of many friends you got a new heart. With that new heart you even got to stretch your legs a bit in July and August of that year. 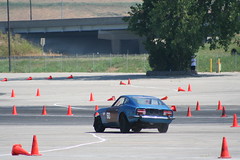 Before your legs were fully stretched though I decided it would be a good idea to give those legs a go on an autocross course, no video of that day is available, but there are photos of your glorious and fateful run.

Though you didn’t even get to complete the full run, I had to get out and assist you, and recruit other help as well, to get back to your grid position. 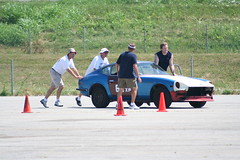 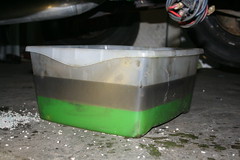 You punished me for taking you out for an autocross too early in your recovery, and showed me your displeasure by destroying the number 2 piston, and providing a nice beautiful mix of oil and coolant when I get you home and drained you.

After this incident you sat for a quite a while, really until late 2008, you lived partially in a warehouse, sometimes in the garage in Missouri. Though with a little effort you got a new heart put in, you even got to cruise around the neighborhood one last time before being loaded onto the trailer and taken to our new home in Colorado. 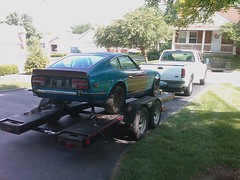 Life in Colorado wasn’t as grand as you had hoped though. You did get some attention here and there, but new priorities in life got in the way of the real attention you needed. It was then decided that you would be better served by finding a new owner. Today that new owner came and took you away. I hope you enjoy your new life, you were my first real project car, and while I never completed you, I am greatful for the time we spent together. I will miss you 240z, perhaps one day in the future I may run into one of your twins.