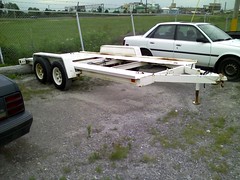 Sunday was a different story. I had planned on getting a lot done, but ended up sleeping all day. While it was nice, it was far from what I needed to get the car going.

Tonight I went out with Russ and Matt Melton and Jeff "The Jeweler" Krekler, down to dinner in Soulard. From there I took Russ back to his house, saw his family, and came home with new motivation to get some work done on the car.

I changed and went outside, setup the laptop to record video and go to work. I was cutting some aluminum scrap I picked up from the Metal Supermarket last Friday. I started making a new blockoff plate for the AAC valve on the L28ET intake manifold. I cut a rough pattern out with the jigsaw, made from tracing the bottom of the AAC valve with a sharpee and an awl to cut into the aluminum. I then went to assemble my new vertical belt sander that I purchased on Friday.

The while taking it out of the box I noticed the darn thing was broken. Not likely broken to the point I couldn't use it, but I decided nonetheless to box it back up and take it back to Sears tomorrow to get a replacement.

So that was the end of work tonight, I couldn't go any further on the plate and had some work to do on a few websites. I came inside to try to work on my video I recorded, but apparently managed to hose the video recording on the laptop by unplugging the camera before shutting off the software, so there's a tip, if you're using the lifecam software don't unplug the camera before you shut down the software, you're libel to lose your video.