Here's a quick update on the 240. I got up this morning and finished up modifications to the bracket I built for the VR sensor, you can see what it ended up looking like in the photo below. It's not all that pretty, but not too bad considering I made it out of a drill press, vertical sander, and a jig saw. 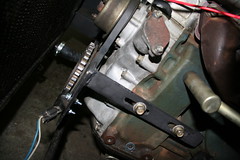 I then ran out and spent a few more hours shopping. I went to autozone and purchased lots of random bits that I needed, another fuel filter (that didn't fit), wires, splices, antifreeze, radiator hose, oil, gear lube, and a ton of other random stuff. I also took the battery I had purchased for the parts car back to get tested, it wouldn't charge so they gave me a credit (it was out of the year's free replacement), so I got a new battery for $9.95.

Whittle came over and assisted with a few more wiring questions. From there I tried to get started on wiring. I began by looking where exactly I was going to run the wires, in order to find an existing hole to run them through I got up under the dash and started removing things on the passenger side. The first thing I removed ended up being part of the AC system, which I wasn't actually sure the car had! That opened up two holes, with grommets to boot, that allowed me to start running wires.

Terec came over and started assisting with a few things, first thing we did when he got there was make a list of all the tasks left to do on the car. We used a sharpie on the windshield. After that he was visibly more productive today than I was. He actually mounted the sensor up to the motor and made sure that it was within specs to the 36-1 wheel. After that he was able to get the radiator mounted and the hoses attached to the proper locations. He then got the Oil Cooler mounted and the hoses finished up from what Eric started doing yesterday. You can see the oil cooler and radiator mounted in this photo. 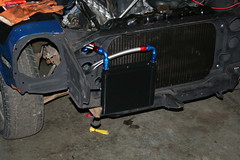 I was able to get some of the EDIS wiring started, as well as power wires ran for both injector banks, as well as the Megasquirt harness wired into the engine bay, though the MS harness doesn't actually connect to anything yet. I have a LOT more wiring to do this week, hopefully getting most of it done Monday and Tuesday night with a goal of trying to start the car on Wednesday. We'll see if that happens, if I don't at least attempt to start it before Sunday I've vowed to shave my head....

Here are more photos from today.