Last night I returned the Vertical sander that I had purchased from Sears that was broken when I removed it from the box. I got a replacement sander and brought it home to install. I setup the webcam on the wall, right above the work bench, and got to work assembling the sander.

5-10 minutes later I was ready to start sanding on the aluminum I had cut with a jig saw the day before to make a blockoff plate for my AAC valve on the intake manifold. I tell you what, a vertical sander is a fun thing to have! Here's the result of what I was making, though I'm still going to drill a hole in it and tap that hole for the temperature sensor I'll be mounting in the intake manifold. 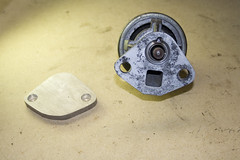 I also got to use my new drill press to drill the holes in the plate, it all worked really darn well.

After getting the plate made I decided it was time to remove the intake manifold from the car so I could tap and fill some of the holes on the manifold that I don't need to use. I brough the webcam with me and mounted it directly above the motor on the chery picker. I started removing bolts, then decided to read the haynes, it told me I need to remove the Turbo and a few other things to get the manifold removed, I guess I should of planned things a bit better and done most of this work BEFORE I put the engine back in the car, it sure would be a lot easier to get to.

Once I realized how much I had to remove to get the manifold off I decided I didn't want to do all that last night, it was nearly 10pm by then. So I moved to the other side of the motor, bringing the camera with me to the other side. Andy and I decided last week to remove the attachments for the oil cooler for now, I'm going to attempt to get the car running without the cooler for now, and reinstall it down the road as I don't have all the hardware for it.

So I started removing it last night, got it removed, and then saw that without the attachment there isn't a way to mount the oil filter to the block. So tonight I'll be attempting to remove the oil filter attachment from the parts motor (78 l28e) to see if I can use it on the 83 L28ET.

After all this I decided it was time to head inside and play with the cool video I had shot last night, only to realize that I had click on the record audio button, instead of record video. So yet again, there isn't any video to be had :(

Tonight though I promise I'll do my best to get it right and have a video to post of the evenings work.