All in a day's paint

After yesterday's fun Eric and I spent some time in the garage today. I was awoken this morning around 8:00am by the doorbell, the Dish Network guy showed up right on time, more on that topic tomorrow on http://TheMadBlogger.org. After I got the Dish guy going I sent Eric an SMS to let him know I was out in the garage working.

The first thing I need was to lay some fiberglass in the passenger floorboard. I had missed a few spots on that side earlier in the week, and layed some extra resin in the floor to smooth out the pockmarks from the cleaned up rust.

While I let that dry I pulled the extra rear end that I had in the garage so I could start cleaning it up. As soon as I saw the rear end/suspension sitting in the driveway I immediately noticed a difference from the rear suspension that is on the car currently. The current suspension doesn't have a rear sway bar, the spare does. That's fine and dandy, I'd prefer the rear sway bar, the problem though is that the fuel cell frame that I fabricated fits right where the sway bar goes on this spare suspension.

I'm not sure what I'll do with that aspect, but Eric and I spent the rest of the morning taking apart the spare rear suspension. We cleaned a lot of parts, figured out that the shocks (at least on the rear) are KYB's, they do look to be fairly new (or unused as that may be more correct). We got just about everything apart, and came up with plenty of parts to clean and paint (Powdercoat for Rande?) later in the project. Before I can use the rear swaybar I'm going to have to figure out what I'll need to change on the fuel cell bracket to make it work. I might be able to move the mounts for the bar a little higher to allow me to use the cell as currently fabricated.

From there Eric and I started to prep for paint the interior. We cleaned up some of the dust that had gathered, drilled some pilot holes for the seat bolts in the floor (to get to the rear brackets for the seat mounts we had to cut a whole for a socket to fit through). We brushed, vacuumed, wiped and scrubbed the interior to try to get it ready for paint. We lowered the car down off the jackstands and spent the rest of the afternoon painting the interior with a nice satin black "Chassis Saver" paint that I had picked up on Saturday morning.

I had purchased a gravity fed spray gun back in 2003 when I had the 350Z, previously using it once to spray some waste of money wax on the car, the gun hadn't been used since then. I think the paint this time around turned out great, an easy low cost solution that is WAY cleaner than it was prior to all this work. It was a bit laborious, but I think well worth the effort, Eric agrees.

Here are some before pictures 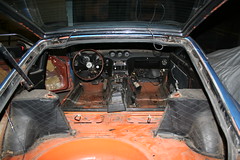 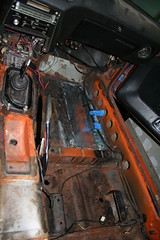 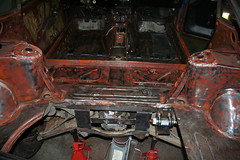 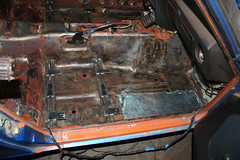 And here are some after shots. 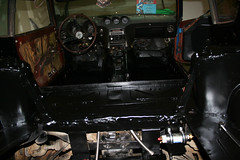 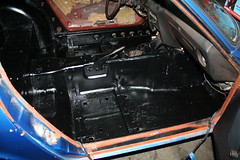 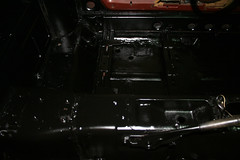 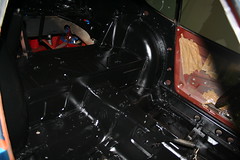 There are more photos in my Flickr set for Project240z.com

We ended up painting a few coats over most areas of the interior and then let the car sit for a while to dry. Once dry we rolled the car back into the garage and started running fuel lines. We ran both the feed and return lines for the fuel cell, mounted the pump again after removing it for paint, and fixed the fuel lines to the transmission tunnel.

Tomorrow I'll be working on the motor again. I hope to get the intake and exhaust manifolds back on the motor so that we can put it in the car Tuesday or Wednesday night. From there it'll be time to start wiring up the Megasquirt.