A little success, found 1 of 3 missing screws, AND the car started, twice!

So last night after work I came home with the intention of trying to figure out why the car wouldn’t start. My intentions were to check the positioning of the 36-1 wheel for the VR sensor that drives the Megasquirt/EDIS setup. After checking the positioning of the sensor I was going to do a compression check on the motor. Well I threw those intentions out of the window, I wanted to see if after charging the battery the night before things would be better as the changes from the night before were not completely tested due to the drained battery.

Well wouldn’t you know, the car started! And not just once, but twice! It actually even ran for a bit, assuming I had my foot on the pedal, otherwise it would die, but that didn’t concern me, not yet. So it ran, and I have megasquirt log files to prove it! I went to try to start it again, and got nothing, but this time it wasn’t timing, it wasn’t motor, it was the starter. The starter wouldn’t turn over, it would only click, which made things really weird because I hadn’t had that problem before. Rather than trying to make it work I simply decided to pull the starter out of the car and check it out, it looked okay. 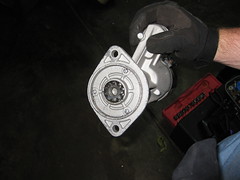 I decided I would take a picture of the flywheel, and as soon as I took a picture I noticed something shining off the flash. 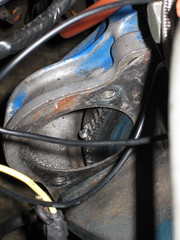 As soon as I took a second look at it I knew exactly what it was. Here’s a photo of it after I pulled it from the flywheel. 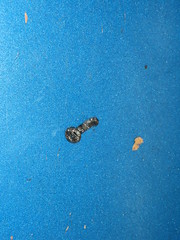 Want to know what that is? That is one of the three missing screws from the starter when it fell apart a few weeks ago 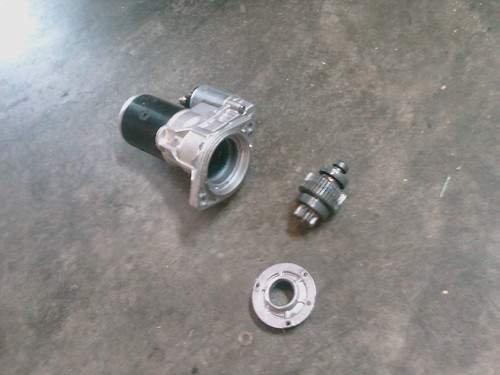 So with that revelation I decided that I would call it a night from trying to make the car run. I worked on cleaning up some things in the garage, I need to get it up on jack stands and find the remaining 2 screws which I believe are also still in the bell housing. Perhaps this weekend, or early next week I’ll get it up and find them.

I also started disassembling the old block, crank and pistons as I need to get rid of those here soon, especially if we find out about our home offer soon (http://www.going2colorado.com)

Here’s a brief video of today’s work, nothing too fascinating, next time I have it running I’ll get audio!

« Another night with not much success! It runs, twice and there's audio/video proof! »
comments powered by Disqus